Beryl Stuford found it hard to look into the mirror. It was a very old fear that still flung her to the ground when she saw her 30-year-old face in any reflection. Her one glass eye protruded slightly from the corner of her lid and the scar across her upper lip gave her a bit of a mustached look when the light was too searing. She had a slender and beautiful nose that had been carefully sculpted by Dr. Sheldon Martin when she was twenty-three, and a pair of muscular thighs that were shaped and pounded by her uncompromising trainer, Freddie Tyler.

That was before the accident.

Beryl didn’t have a boyfriend. Not that she didn’t want one. No, most of the time she was desperate for one, but she felt too ashamed to share her face with a man. She would wonder what he was thinking. Was he sorry for her or was he nauseated? Or was he just waiting for the right time to split? So Beryl didn’t date. No chat room contacts, no internet searches.

Beryl loved animals. For the past six years, she worked at the Massapequa Veterinary clinic as a Vet’s Aide…she helped weigh the animals and she held them as they got injections or exploratories. And that’s where she met Mr. Floppy.

Mr. Floppy was a cross between a Golden retriever and a 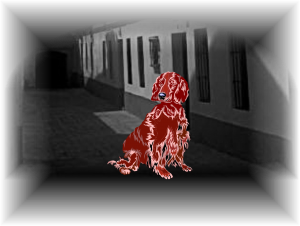 Poodle. He was a reddish tan color and had the saddest eyes Beryl had ever seen. He had been found wandering all over the streets alone by a family who were visiting the area…no collar, and no tags, so they brought him to the Vet and left him there. Actually, Dr. Polly Fraybush, the Vet on duty, gave him the name Mr. Floppy, because he was a long-haired dog with big floppy ears and a sad sack personality.

But when Beryl came in to hold him down while Polly examined him, he seemed to spark up a bit. At one point he looked up at Beryl and then licked her finger. Polly seemed to be touched by this, and asked Beryl if she ever thought of having a dog. Beryl said no, she didn’t want any animals. She just loved to care for them right here at the Clinic. When the exam was done, Mr. Floppy stood on the table and walked toward Beryl. She picked him up and he seemed to melt close to her. For a while, Beryl couldn’t let go.

They kept Mr. Floppy at the Vet for three days. They put pictures up all over the area, but no one came to claim him. Beryl would take him for a walk every lunch hour and when they came back to the Clinic, he would come close to her legs, and lick her hands. Finally, when nobody had claimed him, Beryl told Polly that she would take him home till they could get someone to adopt him. But she knew in her heart that wasn’t true. Mr. Floppy didn’t judge her. Not with her fake eye or her very prominent scar. No. He looked past all of that and just wanted to give her love. Beryl wanted to cry, but she held it back.

Mr. Floppy was placed in a room for the day with water and some food until Beryl was about to leave. She went in and got him and drove home, with a doggie bowl and a good supply of food and treats.

Mr. Floppy became her anchor, her partner, and her best friend. She talked to Mr. Floppy at night when she couldn’t sleep, and in the morning when she was getting ready to go to work. He slept by her side, and when she would sometimes cry after she looked in the bathroom mirror for too long, Mr. Floppy came to her and begged to be picked up so that Beryl would take her mind off whatever pain she was in. Mr. Floppy didn’t know what that was, but he could feel her sorrow, and he only wanted to make it better.

After a while, Beryl couldn’t bear to be without her dog, so she started taking him to work. Dr. Polly didn’t mind, but he had to be kept in a room while Beryl worked with her on a cat or a hamster…And every lunch hour, Beryl would walk with Mr. Floppy for blocks and blocks around the Veterinary Clinic and she would talk to him about anything that came into her mind. Once, when a very 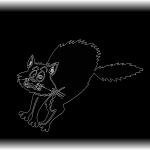 agitated cat came with it’s owner into the Vet, she managed to pull free from her master’s hands as Beryl came in with Mr. Floppy. The cat immediately ran to the dog and started scratching and hissing and clawing at his face. Beryl quickly managed to pull the wild cat off her dog, but he suffered cuts and some of his hair was torn out. Beryl started to cry, and brought him quickly into Dr. Polly, who tended to him, and gave him lots of treats. But Beryl couldn’t work that day. She took him home, bathed him, dried him off, and hugged him to her, even as she fell asleep.

Three days later, Mr. Floppy was almost as good as new. So Beryl took him into work again and at lunchtime, took him for his daily walk. He hadn’t had a lot of exercise for the past three days, so Beryl decided she would give him a much longer walk than he would usually get. She drove to an area that was fairly new to her and parked the car. As she walked down a beautiful street with lots of shops of men’s and women’s clothing, she saw a tall man walking toward her. He must have been in his forties and had striking red hair. He was wearing glasses and a casual suit. He walked quickly, looking intently at Mr. Floppy. “Scooter,” he shouted, as he got closer. Mr. Floppy tried to run to him. He started to squeal and yelp. Beryl couldn’t understand any of this. The man walked faster and came up to them. “You found Scooter, you found my dog…where did you find him?” He was breathless. “He’s been missing for over a month…he ran away…and we don’t know how he got out of the house. My son must have left the door open to pick up the mail outside and didn’t see him. I’ve been searching for him like crazy and no one had seen him. I saw you out of the window of the Men’s Boutique over there on Third Street and I didn’t believe it. Where did you find him?”

Beryl was silent for a moment. She had to catch her breath. “I didn’t find him. He was brought into the Veterinary Clinic where I work, and I took him home…he had no tags or anything.” Mr. Floppy was licking the man’s hand.

“I’m Lucas Frain…and what is your name?”

She shook his hand. He had a strong grip.

“Thank you so very much for taking care of my precious Scooter…he is such a wonderful spirit,” said Lucas.

“I love this dog. He was easy to take care of,” said Beryl. “Are you going to take him now,” she said.

“No”, said Lucas. “You can take him home now, but I would like to come to your house or wherever you live and we can talk about how to make the exchange a little easier for you. You must be quite attached to him by now.”

Mr. Floppy was straining at the leash to climb on Lucas Frain. Beryl was trying best she could to hold back her tears. She gave him her phone number and told him to call her that evening and they would make a plan.

He thanked her again, looked deep into her eyes as she tried to lower her face, and said he was so grateful to her.

Beryl walked Mr. Floppy-“Scooter,” back to the Center. She told Polly what had just taken place. She started to cry and Mr. Floppy came over to her and licked her leg and looked up at her. His eyes were sparkling.

That night Lucas called at around seven thirty. Beryl told him to come the next day, which was a Saturday, at around two o’clock. Mr. Floppy was very attentive to her. Perhaps even more than he had been in the past month. He slept with her and stayed by her side all the next morning.

At two o’clock sharp, Lucas arrived at Beryl’s tiny home. She had him sit down in her small living room, in her arm chair, and she sat across from him in the rocker. Mr. Floppy jumped off the couch and went to sit on the floor between the two of them. He looked from one to the other, back and forth. Lucas asked Beryl how she came to work as a Vet’s assistant. He asked her where she had lived before, what school she went to. He said nothing about the dog. But he was looking at her all the time. She kept lowering her head as she talked.

“Why do you keep dropping your head,” he asked.

She couldn’t answer. He asked her again.

No one had ever asked her that. Ever. And she was uncomfortable.

“Are you worried about your face? I see that you have had to have an eye replaced, because I work in that field. Are you self-conscious about your scar?” he asked.

She was so flustered, but in that moment she felt more truth come out of her than she had ever been able to admit. “Yes. Yes, I am,” was all she could say.

Lucas just looked at her. After a moment he said, “Raise up your face, Beryl.”

And she did… almost in defiance.

“You know, you are very pretty,” he said.

She could say nothing. Finally she said gently, “I bet your son and your wife miss Scooter very much.”

Lucas looked at her again. “My son misses him terribly. My wife died two years ago from a car accident that was fatal for her. A driver that was drunk.”

They were silent for a long while.

“I’m so very sorry for that. Deeply sorry for you.” Beryl started to well up with tears.

He took a tissue from his pocket, came over to her, and wiped her face gently. She didn’t lower her face.

Lucas told her about his life. He worked for an Urgent Care Clinic, and ran the business. His son was ten years old and has still not gotten over the death of his mother. He talked of his grief and how he had to see many practitioners till he could even make peace with her death. Beryl listened intently. She then talked about her life. Her fear. The accident. Her deep sadness.

At one point, Lucas asked if he could hug her and she told him he could. He held her gently. The hours passed. They talked. They ate some of the food that Beryl had left over from lunch in her fridge. It was eight at night. Lucas left Scooter with Beryl overnight, and said he would come the next day. And he did. And every evening after that. 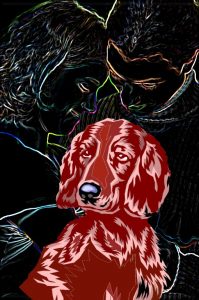 And that’s how Beryl Stuford met the man she would eventually marry six months later, and have a son that she would cherish and love, and a dog who was renamed Mr. Scooter-Floppy by her devoted husband Lucas. A man who loved her for her gentle spirit and deep sensitivity, and the loving care she gave to an animal who carefully and purposefully…