Why Mickey Should Run
by
Cynthia Adler

Well…you might just be in luck! It seems that lately, this is a country where you don’t really need a lot of experience to apply for the job. Your speeches could promise everything (even if you don’t deliver), and you could appoint various family members to help run some of the government agencies for you! And…you could hang out wherever you want, protected by a swarm of security teams, all paid for by the people of this wonderful country. Whew!

And while you might need something of a higher profile to do that, it could really come from anything…an Oprah Winfrey, an Alec Baldwin…Hey, even a Donald Trump could run!

But in this digital age, where spin-doctors twist your brains around and little PR gremlins work the ear much quicker than the eye, people are confused. Many are not sure now that they have anyone to rely on anymore, and sadly, many do not even have the impetus to vote!

But oddly enough, there is a light in this strange political darkness for the next election. A candidate with a strong resume and a powerful name recognition. A candidate that yes, has lent his name to many commercial products, but unlike some others, he never ever took a penny from any of them! And, a candidate without a hidden agenda, who would gladly commit to a sane eight-year term and just might follow through on his promises…

And that candidate is… 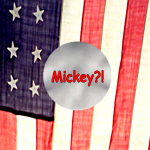 Yes. Mickey Mouse. I know it may sound a bit radical, but hear me out.

You cannot find a candidate with more integrity today. Want to abolish the use of unlabeled GMO’s in so much of our food supply? Heavy metals and fracking with toxic chemicals sneaking into the waterways? And what about all those gag orders and threats blocking those non-invasive alternative cures from coming into this country? Well in that case, Mickey is your guy. He knows where all the dead mice are buried to hide the frightening results from the thousands of food and medical experiments that have been done on them. And Mickey’s not taking any chances!!?

And Mickey would appoint someone like Donald Duck as Secretary of Agriculture to head the FDA. Someone who would not go into collusion with big corporations to suppress evidence, or let them buy their way out of laws that are meant to protect people. No cuddling up with lobbyists to pass on any cancer causing pesticides or drugs with life threatening side affects. Oh no. He knows for all those kids out there with ADD, allergies, learning disorders and autism (just to name a few), Daisy would shove his head in the oven before he could even collect a dime. And Mr. Duck understands that he better “lighten that toxic load,” so to speak, or he could be labeled a “quack.”

And what about the EPA? Well…not to stray too far from American tradition… no better choice than Goofy!… Need I say more?

Foreign policy? Look no further than Epcot in Disney World. Countries from all over the world living side by side, in peace and harmony. So what can Mickey see from his window? He can see Mexico, Italy, France, Africa, China, Norway and Morocco. And… he can even go there for breakfast if he wants!

Also…Mr. Mouse is completely loved and adored by every head of state that ever was a young child. He has no vendettas to avenge, no rich cronies to give incomprehensible tax breaks to, and as for oil…too crude and too messy to deal with. Goodbye oil… hello alternative fuel! (made from the massive amounts of garbage collected from Disney World every hour!)

And might I add, that you will never ever see Mickey try to grope a female Disney visitor, no matter how big her chest is, or how much leg she shows. Mickey wouldn’t ever-ever brag about any female conquests in his life. Mainly…because there aren’t any!

And how refreshing is this…Mickey thinks a “Spicer” is just something you stick on food if it tastes too bland. He thinks Tweeting is what he hears from the fake bird sounds coming out from those speakers in Disney World. And…if you happen to mention Tea Party to him? All he can think of is a steaming cup of hot water with lemon and honey. What a relief!

I’m so glad we live in a democracy and can choose a President. But what do we really know? I only know what I’m fed from a corporate-owned media or some endless dog-and-pony show…

Believe me…this is a no brainer! And what have we got to lose?

Hey…if we’re already living in a cartoon…
why not go all the way?!